By Mindi Copper
Articles of Interest

Alternative Wood Barrel Aging has likely been made for at least 8,000 years, as evidenced by residues of tartaric acid found on pottery fragments in Georgia, near the Black Sea. For thousands of years, clay vessels were used throughout the Middle East to store and transport wine, and later, both Greek and Roman societies followed the same practice. As the Romans, around 100BC, pushed north into what is now France, they encountered wooden barrels used by the Gauls to transport beer, and adopted the idea for storing and moving wine.

Within 200 years or so, barrels became the most common vessel for transport. In addition, it was learned that the barrels, especially those made of oak, created flavors that could enhance the wines they held. This was perhaps a stroke of luck, oak was in large supply, had the right physical characteristics to make strong and liquid-tight containers, AND added positive flavors and texture to the wines. Two thousand years later, oak remains the almost universal choice for barrels. Almost….

There are a number of other woods that can be shaped into barrels, each with advantages and disadvantages, such as chestnut, mulberry, cherry, and acacia (more correctly named black locust), and juniper, all of which are used in classic Balsamic vinegar production.

Of these, Acacia is showing promise for wine aging as well, and cherry may also offer some interesting options for us winemakers. For a few years, we have worked with a small Burgundian cooperage owned by Jerome Fouailly, who offers some barrels which blend French oak with either acacia or cherry. We tried both, and decided to create single-barrel bottlings of the wines aged in them. 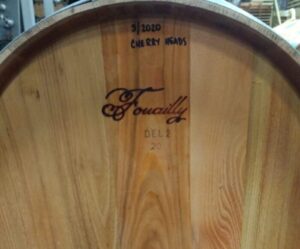 We fermented some of our Gavin Vineyard Chardonnay in a Fouailly “Harlequin” barrel, named for the striped appearance of alternating the oak and acacia staves on the body. These barrel heads are oak, creating a barrel that is about 64% French oak and 36% acacia. Due to this, the body receives a long toasting over a very low fire, while the heads are not toasted. The result, it seems, is a barrel that gives a lush sweetness without the forward “oakiness” from caramel, toast and spice qualities. Acacia wood adds a vivid yellow tint to the wine, along with delicate floral and honey-like aromas, but perhaps its largest contribution is textural. 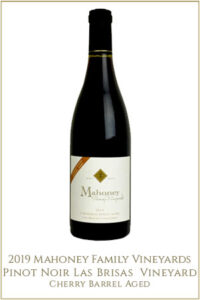 For the cherry head barrel, the body of the barrel is French oak, with the same low-fire, long toast regime as the Harlequin barrel. The heads are all cherry, untoasted, with noticeably wider grain and a redder color than the body. Compared to oak, cherry can add heightened red fruit aromas to the wine, and is much more porous, allowing a lot more oxygen to the wine. We aged a Pinot Noir from Las Brisas vineyard in the barrel for 16 months to see how it compared to a pure French oak barrel. We found the wine quite different, with darker color, more concentrated flavors, and a denser texture. We have reserved 20 cases from each barrel to offer our wine club members.

We hope you enjoy this small study in alternative barrel aging!

Shop Our Wines
previous next
Cyber Monday Sale! Get 20% off your order today with code THANKS20 for new customers. Club members get 10% off their order with code. THANKS10. To enter, please verify that you are 21 years of age or older.