By Mindi Copper
Articles of Interest, In the Vineyards 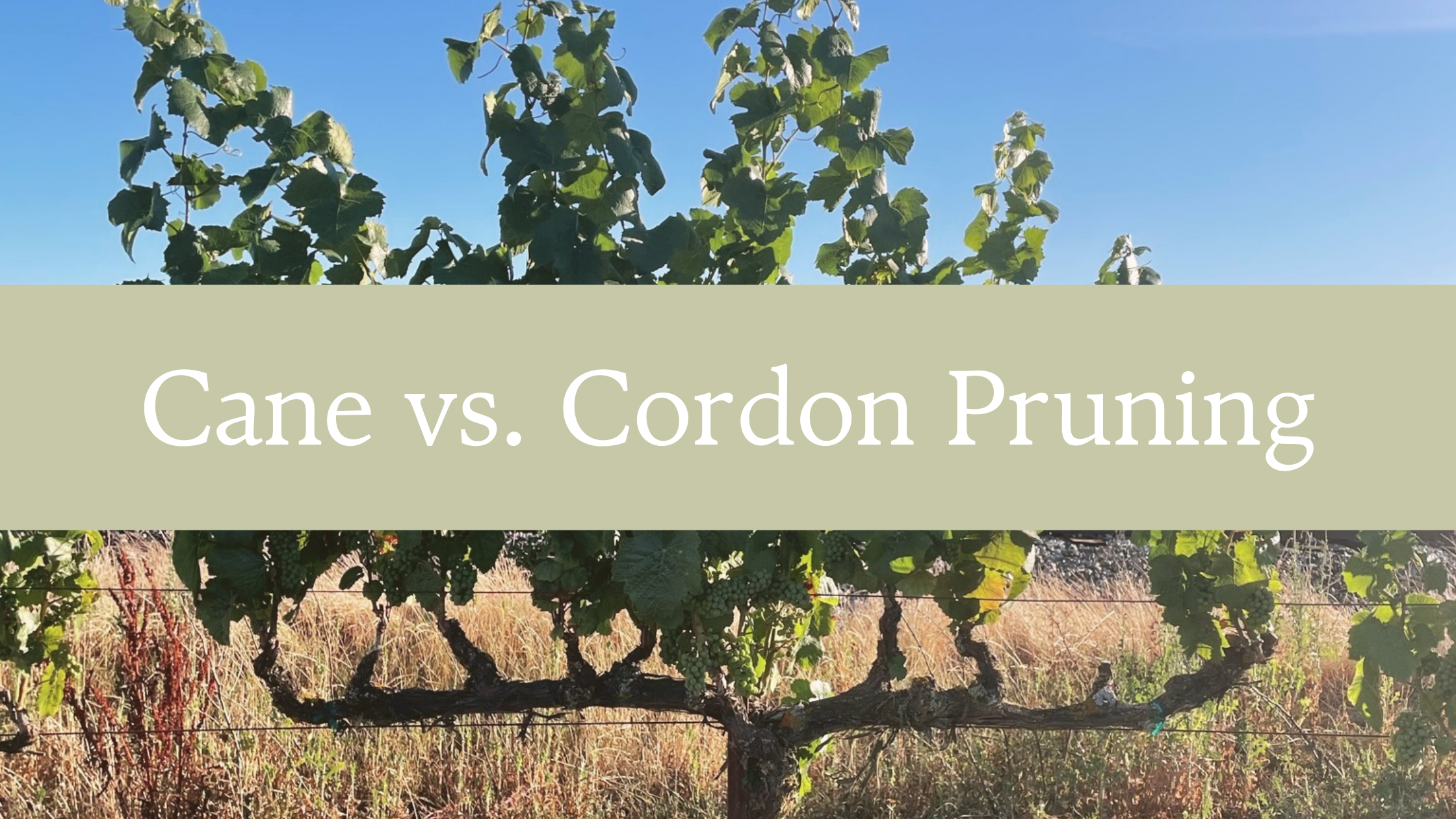 The goal of grapevine pruning is to maximize both yield and quality of the fruit while maintaining the structure and health of the vine. Pruning can take place at many different times of the year depending on the region, varietal or ambitions of the grower and or winemaker. A common time for pruning is between December 1st and March 1st. It is important to achieve balance in a vine. If a vine has too much vigor it may have difficulty ripening fruit. High vigor may also promote diseases such as bunch rot and powdery mildew. Vines that are over cropped may permanently weaken the plant resulting in early vineyard turnover. An unbalanced vine will produce inferior wine.

Small cluster varietals such as Pinot Noir are often pruned using the cane method. During harvest each arm will have produced multiple shoots. The strongest shoot is selected for next year’s crop because the buds are likely to be more fruitful. The basal and apical buds on a cane are generally less fruitful than the buds in the middle. Canes should be cut according to the varietals needs, between 8 and 12 buds usually. An additional cane is selected to become a spur and be cut to 1, 2 or 3 buds depending on the current shoot length and vigor of the vine. This spur will become the next year’s cane and spur. Spurs are always basal. There are several reasons cane-pruning may be preferred to cordon-pruning. One reason is that you are not restricted to the basal buds and may use the more fruitful buds of the middle portion of the cane. Cane pruning also allows for fewer cuts to be made and restricts cutting for the most part to one year old wood reducing the chance of Eutypa lata. Cane selection requires skilled pruners to maintain proper vine structure.

Cordon-trained, spur pruned vines use a permanent horizontal structure that extends from one or both sides of the main trunk that stay in place along the fruiting wire year after year. Each permanent arm has spurs that grow vertically every six to eight inches. The length of the cordon arms is usually determined by the vigor of the vine but they often contain between six and eight spurs per arm. Cordon pruned vines offer a strong, rigid structure, and are often used for large cluster or heavy-bearing varietals, such as Zinfandel. This system can certainly be used on many other varieties, including Pinot Noir, and was the original pruning method for all of the Las Brisas Vineyard. Over time, however, production on cordons can become uneven, and much of our Pinot at Las Brisas and Mahoney Ranch is now cane pruned. Some of our Vermentino vines are still Cordon pruned. Pruning is relatively simple, as spurs on the Cordon are simply cut back to two buds in late winter or early spring, which reduces total time and labor.
We use both styles to prune our grapes, yet we have found that our Vermentino is loving the Cane style out at Las Brisas.
Keep your eyes out when you are walking around wine country to see if you can spot the difference!

previous next
Cyber Monday Sale! Get 20% off your order today with code THANKS20 for new customers. Club members get 10% off their order with code. THANKS10. To enter, please verify that you are 21 years of age or older.